When you read about Guiones in the travel guidebooks, most of them say something along the lines of:

“The town attracts residents whose idea of Heaven is to perfect their headstand, amble along one of the three absolutely pristine beaches, or paddle out to surf. A town so laid back that each day seems to last a week.”

Everyone I met in Guiones agreed, “People are here to surf or practice yoga.” People travel to Guiones from all over the world to do both. Most of the people I encountered were locals, expats, families or people vacationing. It´s not a crowded tourist town, which I was very thankful to find out. I´d pass the same people on the street multiple times a day.

Wherever you need to go, a jungle path will take you there.

The province is named after Costa Rica’s national tree, a guanacaste. This tree is pictured on Costa Rica’s 2000 mil bill.  Nosara is named after an indegienous woman who slit her wrists rather than reveal her tribe’s treasure to a rival tribe. Her blood formed the Nosara River.

Guanacaste, the hot and dry province, is said to get more sun than any other part of the country. At this time of the year, January February  the tree leaves and bushes are brittle. It’s almost as if you can hear them breaking from the dryness when you pass.

To get to Guiones from the Liberia Airport we drove along a main road for about an hour and then turned down a 22mile unpaved rocky road. Barely any of the roads in Guiones are paved, and everything is covered in dust. Quads, motorcycles and dirtbikes are main modes of transportation. You see people of all ages riding them, often with other people squeezed between their laps. 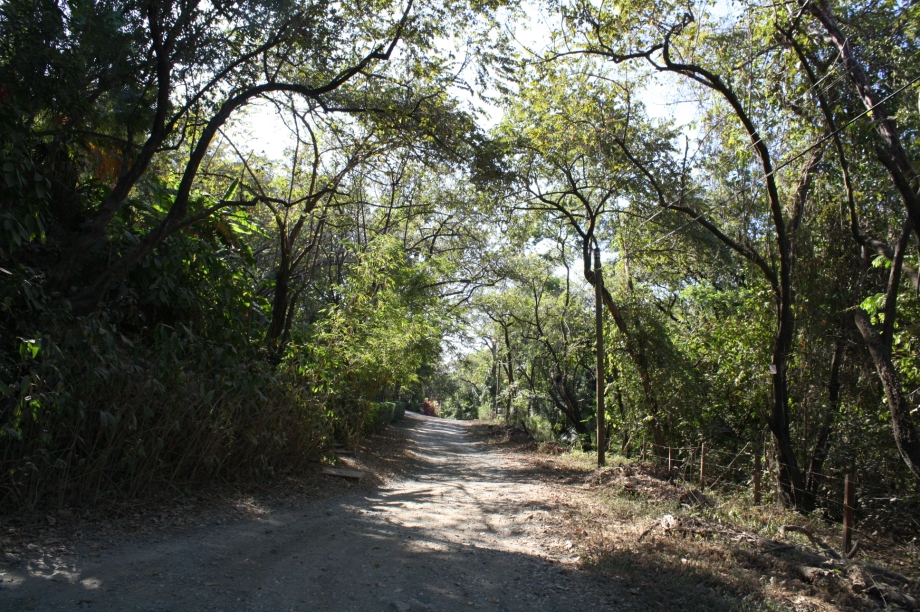 A street in Playa Guiones 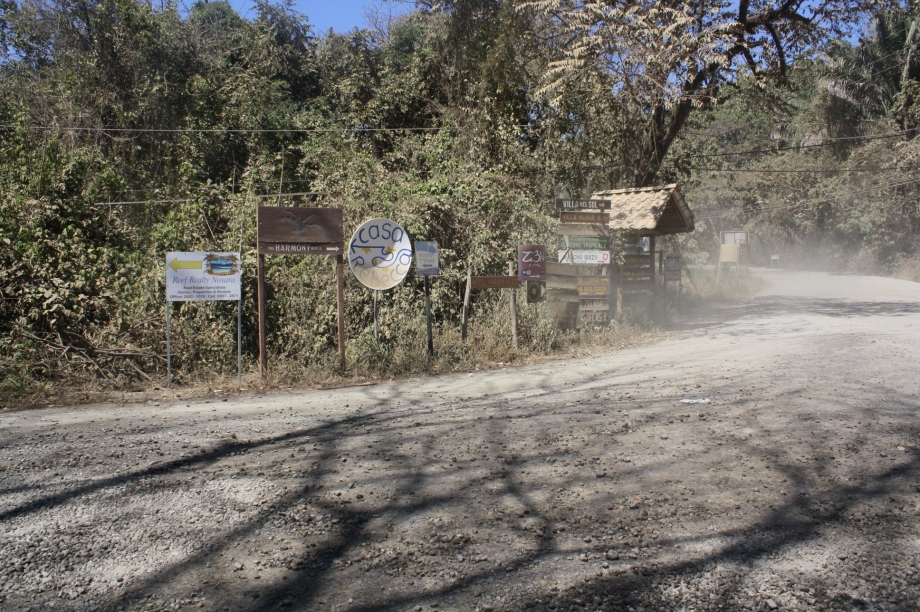 The downtown area of Guiones is in the southside of town where there are a few versions of a typical yoga boutique: organic and bamboo clothing, paisley patterned scarves and gemstone jewerly. Everything was overpriced and in those types of shops I didn’t see anything that I thought really captured the spirit of Nosara. I was surprised to find that prices are pretty similiar to prices in the United States. Even the food at mini supers and restaurants. The best and least expensive place was Rosies, a soda on the main road, close to Coconut Harry´s Surf Shop. Sodas are family owned cafes that sell traditional Costa Rican food for great prices. 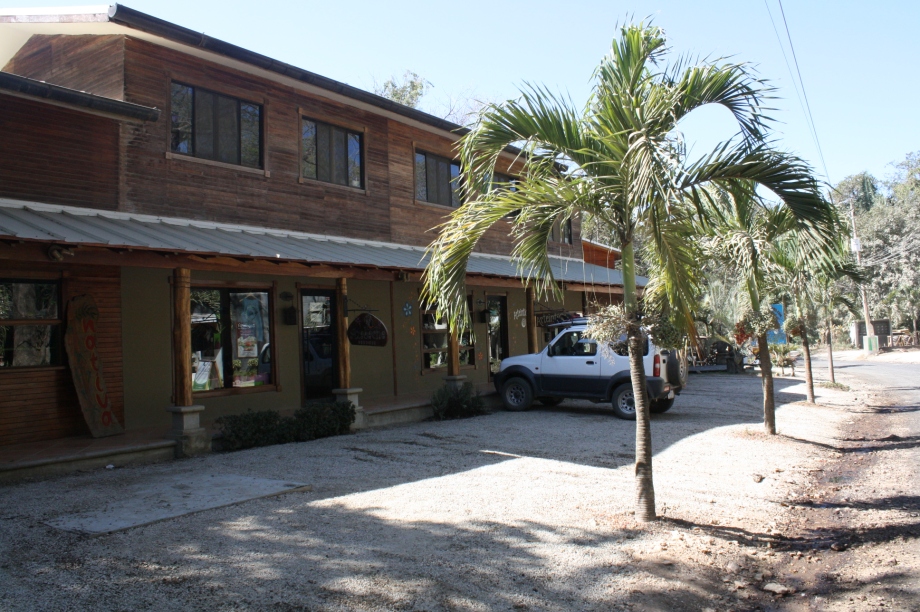 My favorite part of Guiones is that its a very health-conscious community. Not only are there countless yoga classes, there´s a juice bar, an organic grocery, vegetarian options at restaurants and a farmers’ market on Saturdays. There are also stands at the beach entrance where locals sell, pipa, fresh coconuts for 500 colones or $1. Drinking fresh coconuts daily was one of my favorite parts about being in Guiones. It gets dark early, usually around 6 p.m., and because there aren’t any streetlights, it gets really dark. Bars close around 11 p.m. so people go to bed early too.

A traveler I met who has been all over the world, said that Guiones is one of the most spiritually enriching places he’s ever been. “I think this place draws a certain type of person,” people said to me often. And often followed by, “You´ll travel all over Costa Rica but you´ll come back here.” Guiones gives you the time to look inside yourself, to  melt into the rhythms around you, to relax, to not worry, to take your time.

I too was in Heaven practicing yoga numerous times a day. Here´s a list of the yoga studios I practiced at in Guiones:

The classes are held in a treetop studio, and yes, it’s exactly what it sounds like. The first time I took a class there (It was a sunset flow class) was also the first time I saw monkeys! You walk through the jungle to get to the institute. I love this studio because of how soothing it is to be eye-level with the tops of trees and how beautiful the surroundings are. It´s one of the most serene places I´ve ever been. They mostly have hatha flow classes. Drop-in classes are $10.

*Personal bias: This is my favorite studio in Guiones.

The Healing Centre at Harmony Hotel

The juice bar at the Harmony Hotel

Another beautiful outdoor space. The Harmony Hotel is a beautiful space to relax in general. They have huts nestled within the jungle and a wonderful juice bar. They have a variety of classes: kundalini, vinyasa, sandy feet on the beach. I tried aerial silk yoga and acro yoga for the first time here. Most classes have a drop-in rate of $12.

There´s an indoor and outdoor practice space. For the month of January they had a free lecture series on Monday nights sponsered by Blue Spirit’s Omega Series. They mostly have flow and restorative classes. There was a community Kundalini class on Sundays. The drop-in rate is $12.

Across from Tica Massage. On the same road as Casa Tucan. They offer a free community pilates class on Saturdays. I tried Ashtanga yoga here with Laura Waite and fell in love with the practice.

Blue Spirit, a hotel for yoga retreats, is also located in Guiones.

And now on to lodging: 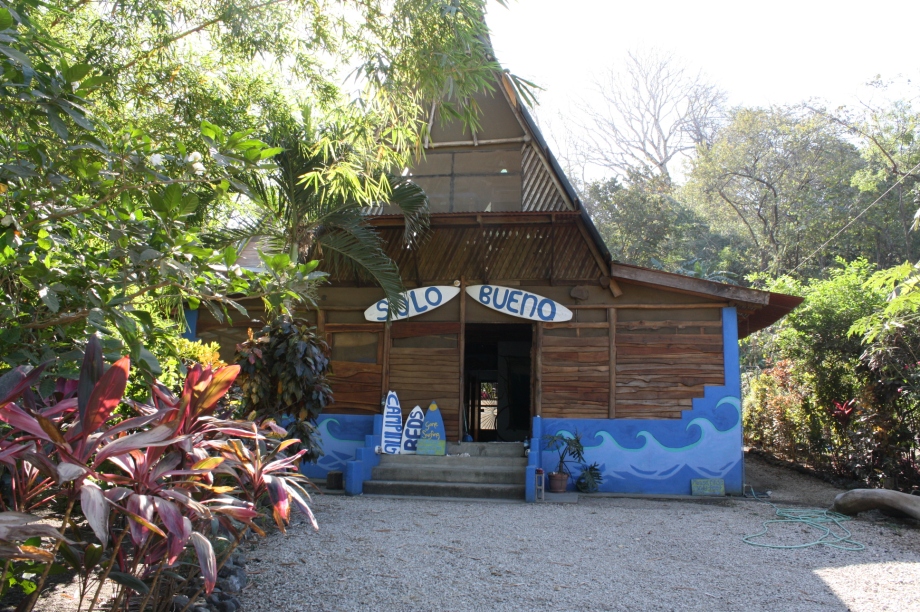 In Espanol this translates to only good. This place is known as a surf hostel. If you look around you’ll notice that many things are made out of broken surfboards.

When you walk in the front door there’s a common room with two hammocks, a couch, a table. There’s a communal kitchen with access to a fridge and applicances. There are cubbies to keep your personal food. There are lockers. There’s one room downstairs with three beds and an open room upstairs with all the other beds.

A bed is $14/night, camping is $10/night. If you stay for a week you get a reduced rate of $13 or $9/night. Because of the size, this place feels much homey-er than most hostels I have stayed at.

A few other inexpensive places to stay in Guiones:

With most of the toilets in Guiones and most parts of Costa Rica, you have to dispose toilet paper in a wastebasket. You can’t flush anything else down the toilet because of fragile jungle septic systems.

Keep an eye out for scorpions and snakes. 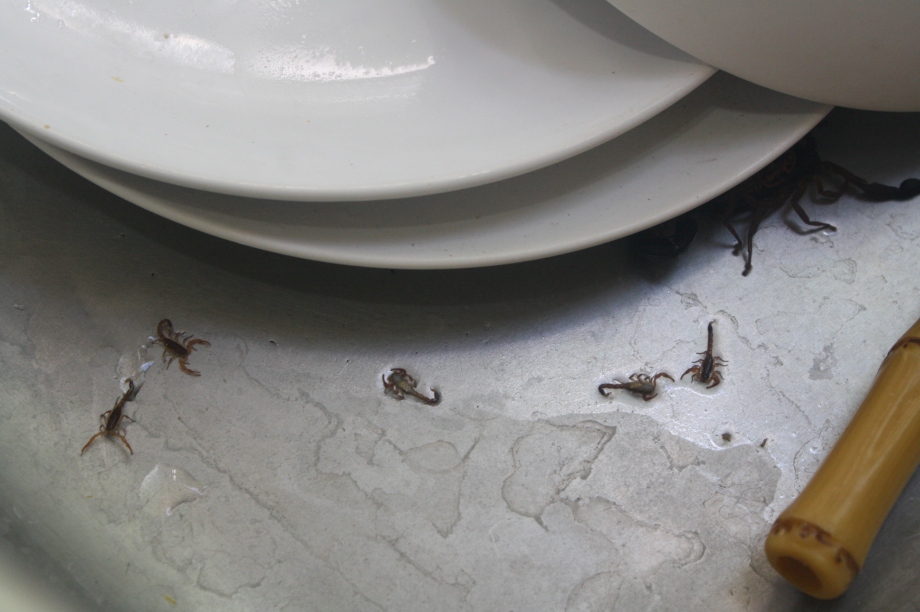 This family was in my friend´s sink.

Nicaraguans walk the beach selling pottery, but they won´t bother you if you´re not interested. Other craftsmen set up tables outside the section of the beach by town mainly selling jewelry. But you really need to be aware of swindlers like this one: 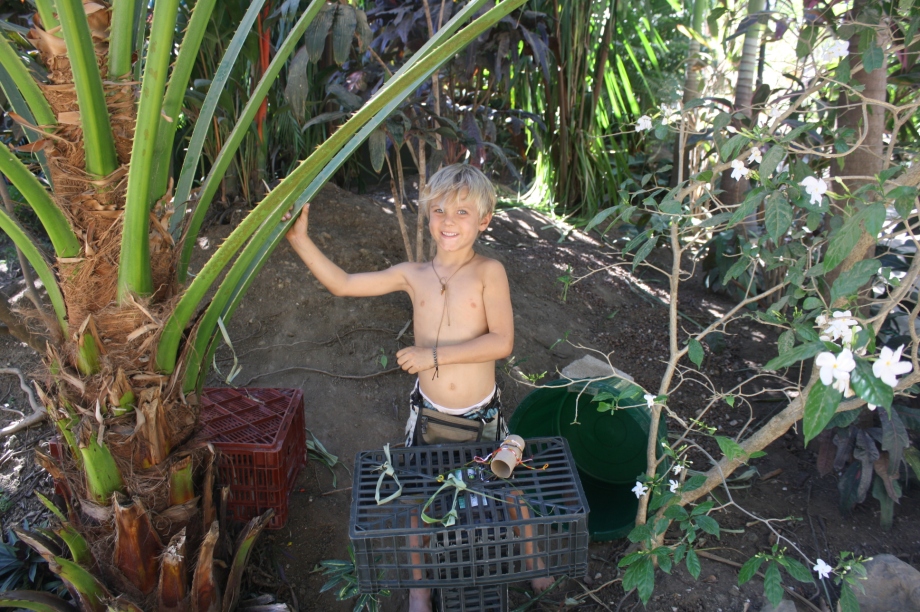