That was the first rule at my hostel on the Caribbean side. As I explored the town, I continued to see this mantra everywhere.

The first night I arrived on the Caribbean side calypso music breezed through the windows of the cultural center in downtown Puerto Viejo de Talamanca. (The locals drop the de Talamanca and refer to it as Puerto Viejo. There’s another Puerto Viejo in Costa Rica, Puerto Viejo de Sarapiquí.) Musicians wearing brightly colored sarongs swayed in the front of the room as people served traditional Caribbean food in the back. I arrived just in time for Gran Feria Cultural: Casa De La Cultura,  an Afro-Caribbean culture festival. As I danced to the calypso rhythms at the free event, I knew I was going to like it in Puerto Viejo. Back at my hostel they were hosting mud wrestling. There was already plenty to smile about.

I started my Costa Rican journey on the Pacific side and most people I met said the Caribbean side was nothing much, to put it nicely. I feel like some people in the States are also like that, always thinking their side of the coast is better. When I got to the Caribbean side and explored Puerto Viejo and every beach south, I realized that no one knew what they were talking about. Regardless of what people say about a place, you can never judge it until you’ve been there yourself. Until you experience something yourself, you never really know. Each day in the Caribbean side I found something new to love.

The Caribbean side pulses with life.

So many of these beauties everywhere

Bright blue morpho butterflies flutter right past your face sometimes. Neon orb-weaver spiders weave webs all through the jungle and between the power lines of the road.  Some say that the Caribbean side lacks a dry season. It rained most days I was there, but most of the rain poured during the night. In turn, lush green vegetation swallows you up. Leaves of trees seem to reach out and cling to you.

The Caribbean side is a mixture of all different types of people and cultures that includes indigenous tribes like Cabecar and Bribri Indians. Artisans sell jewerly and clothing all along the road, which adds to the vibrant colors you see everywhere.

Bob Marley music can always be heard somewhere. The jungle path pushes right up to the beach in Puerto Viejo and Cocles. There are restaurants in Puerto Viejo for every price range with a wide list of options from typical sodas to Thai and Italian.

In Puerto Viejo, there’s always something to do. There’s a farmers market on Saturday mornings. Lazy Mon hosts an open mic night on Sundays. Tasty Waves has trivia nights on Tuesdays. OM Yoga has a community class on Wednesdays. Jessy Chick performs at EZ Times on Wednesdays. There are tons of shops with really cute clothing and great souviners.

My favorite store in town is Luluberlu. It’s on one of the side roads and is a must-go-to if you’re in town. Just look at all these colorful things: 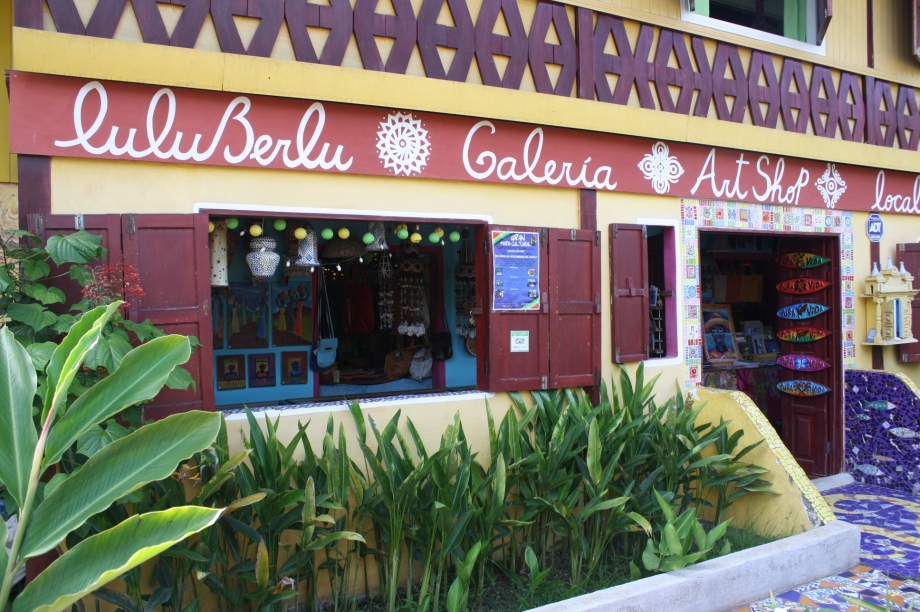 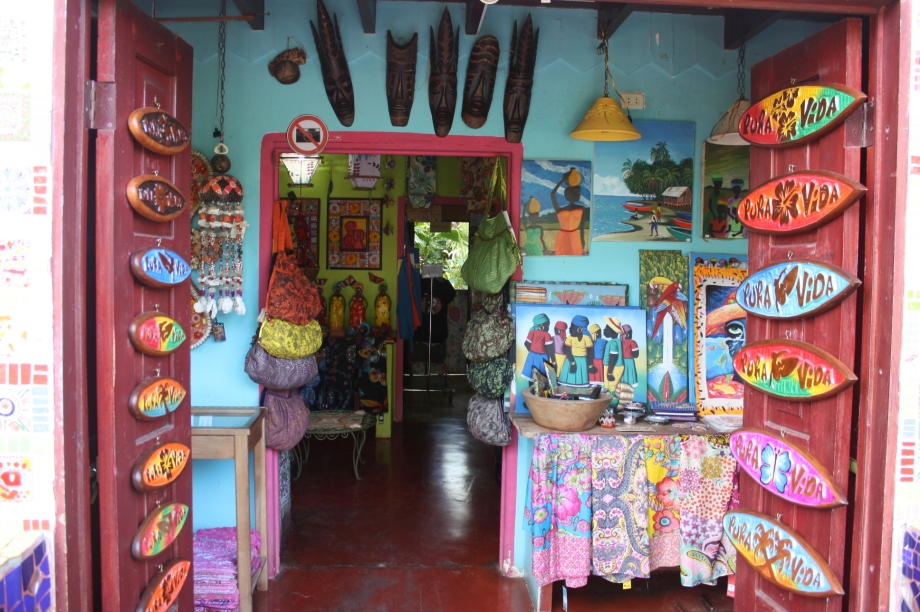 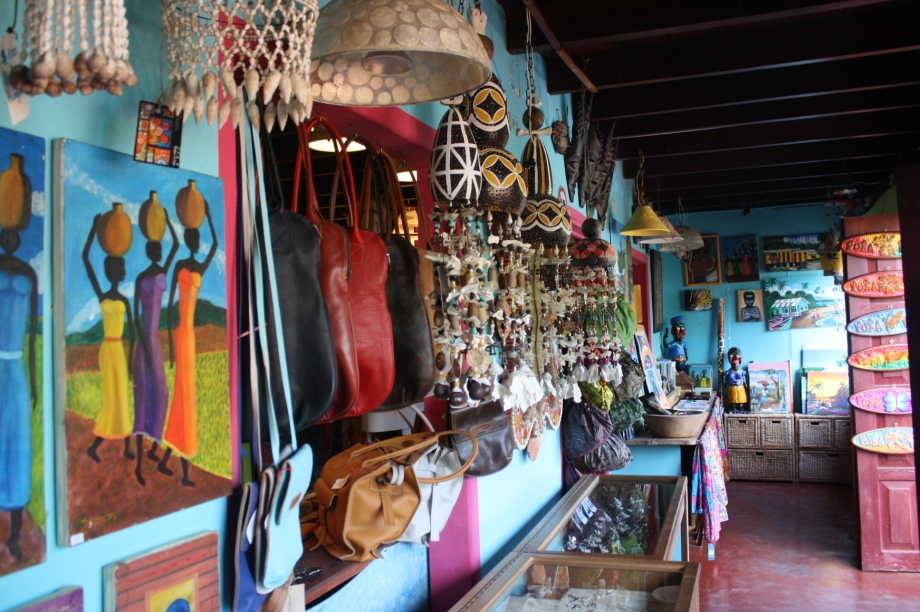 When you talk to most backpackers about Puerto Viejo, they’ll suggest the hostel Rocking J’s. Most people I talked to didn’t really know anything else. But there are plenty more options. I knew Rocking J’s was a party hostel, primarily targeted at the 16- to 21-year-old crowd. I don’t mind partying every once in awhile, but I didn’t want to be living in the party. Rocking J’s is a great place to visit though. They have tons of beautiful mosaics. 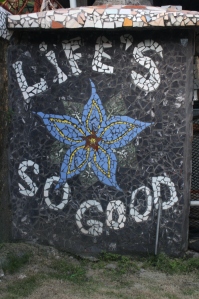 A guy I met at the bus station in Nicoya told me to go to a place called La Ruka instead. The name stuck with me as I traveled throughout Costa Rica. I ended up spending 16 days at La Ruka, my longest stay since volunteering at the ranch. When driving from the center of town, La Ruka is on the right, just before Rocking J’s. The couple that runs the hostel were extremely welcoming and accommodating. It’s one of those hostels where the other guests become your family. By foot, it’s around 5- to 10- minutes from the center of town.

One of the main differences of Puerto Viejo than most of the other places I’ve visited in Costa Rica is the paved road. The paved road added a whole new dimension to things. For one, people drove much faster than on the rocky, dusty roads.

Puerto Viejo is a bit seedier and rougher than most places I’ve been in Costa Rica. There are many places where you don’t want to walk or ride your bike at night regardless if you’re alone or not. Danni, the co-runner of La Ruka, told me, “When you walk at night be confident, and shine your light out.” I think this roughness is part of the reason Puerto Viejo gets a bad reputation. It’s not like people are murdering people in the streets. It’s mainly petty crime like people stealing your belongings. I’ve heard of worse things happening in Santa Teresa.

Like when traveling anywhere else, if you go out at night, be sensible. Don’t walk alone in the dark. Don’t carry anything valuable on you. And most importantly, shine your light out.

In Puerto Viejo people will openly offer you marijuana. More people ask, “Do you smoke?” in Puerto Viejo than any other place I’ve been in Costa Rica. I can see people being put off by that, but it’s as simple as saying, “No, gracias,” and walking away. The locals also have a favorite go-to line, “Hey girl, where you from?” It’s like they memorized that English question and nothing else.

After Puerto Viejo there’s Cocles, Playa Chiquita, Punta Uva and Manzanillo. I loved the jungle feel of the places along the main road.

You never know when you’ll need a little jungle love.

Outdoor dining in the Caribbean

My suggestions as always: rent a bicycle and explore. The day I rode south of PV, I really started to fall in love. I felt like each passing sight and sign was written for me, especially in Playa Chiquita. I’m pretty sure I could stay there forever.

“Chocolate tours, vegan and vegetarian food, kundalini yoga, save the forest, and plant trees,” are just a few of the signs  I rode past.

Just when I thought things couldn’t get any better, we pulled into the beach Punta Uva.

This instantly became my favorite beach in Costa Rica.

In Playa Chiquita my favorite place is La Botantica Organica, a vegetarian, vegan and raw foods cafe with a store that offers all kinds of sustainable, eco-friendly, and local products. While I was in Puerto Viejo they hosted a community movie night and community art showcase night.

At La Botantica Organica I met happy, healthy people who were facilitaing community in every sense of the word. I was so tempted to never leave so I could grow in community with them. But now I know I have a Puerto Viejo family I can always go back to.