When I found out a music festival including my favorite Arizona bands was occurring on my birthday, I knew I had to go.

Apache Lake Music Festival was Friday, October 1st and Saturday, October 2nd, but I only went on Saturday.

This won’t be much of a review of the show because I didn’t catch all of the bands, but I’ll share bits of my experience from what I did see.

(This was our breath-taking view for a majority of the ride.)

After driving through an hour of soaring canyons and jagged rock formations at elevations of 1,900 feet along a cliff’s edge, we made it to Apache Lake around 4 p.m.

We were able to catch the very end of the Sugar Thieves’ soulful set. (Good thing they play in Tempe frequently so I can catch them again soon.) As the set was ending, the light drizzle turned into thick raindrops and everyone frantically moved the equipment inside. Thankfully the bands were able to continue playing inside. Inside they were also able to play longer sets. So even though the outside stage was set against a beautiful backdrop, being inside wasn’t too bad at all.

Black Carl, the first band to play inside, broke it down with Emma Pew’s raspy powerful voice. They finished their set with a badass beat boxing rap about all kinds of fabulous gangsta activities.

I was too busy enjoying myself to even remember where I placed my camera. I retrieved it for What Laura Says and snapped these pictures:

Once again What Laura Says captured my body into a dancing frenzy. (If you couldn’t tell by the movement in the pictures.) They opened with two songs from Bloom Cheek, “Training” and “On the Fence” (Same as when I saw them a week before. Check out that review on my other blog here.) played an upbeat whirl of psychedelic rock songs throughout and then finished with two covers.

I almost lost it when they played my favorite Beatles song, “I Want You (She’s So Heavy).” This was definitely my favorite part of the night.

As they closed out with a rock-induced version of Sly and the Family Stone’s “Thank You (Falettinme Be Mice Elf Agin)” everyone couldn’t help but belt along. I definitely was able to be myself so thank you What Laura Says.

After that I only caught bits of Dry River Yacht Club’s set and Strange Young Things’ set. I’ll admit– I was too busy celebrating my birthday at the bar and meeting people outside.

But overall it was a really great festival filled with a great atmosphere, great energy, good vibes and good people. Wherever you went people were waving, smiling and saying hello. A festival with the sound of laughter, feet stomping and tunes vibrating is a good one to me.

Attention Arizona residents or anyone able to make it here, there’s a wonderful little festie coming up this weekend (Friday, October 1st and Saturday, October 2nd) at Apache Lake. For $20 delight in delightful tunes by all local Arizona musicians, a refreshing lake, a campsite, indoor bathrooms and more.

Check out the flier: 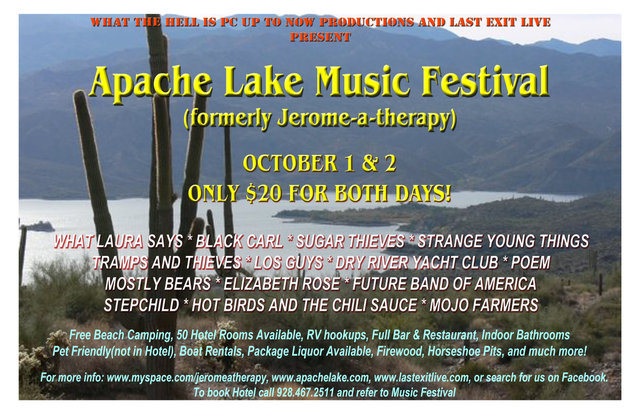 For more information check out these websites:

Life lately: I have felt overwhelmed, anxious, destabilized, stressed, and overcome with grief. I've been snippy, rude, and uncommunicative to loved ones. I have also experienced moments of deep connection, laughter, joy, gratitude, support, and love. I've felt too numb to write and I've questioned how my words could help, of what I could offer to these uncertain times. I've felt disconnected from springtime's renewal and then swept away by the beauty of blossomings like this. The simplicity of white flowers against a blue sky, the courage of a flower to open only to then fall. . While quarantined or while staying home, it's okay if you don't write the world's greatest novel. It's okay if you don't finish that book you never have time to read. It's okay if you don't do any online fitness classes or attend any virtual events. It's okay if you don't do anything "productive." It's okay if all you manage to do in a day is change clothes and eat and it's okay if that feels challenging too. It's okay to take time to process this new reality and let yourself be present with your feelings. . While some people can use this as an opportunity to slow down and "live their best life," others are scrambling to apply for unemployment, homeschool their kids, and figure out how to make ends meet. Others are coping with the death of loved ones. While we're all in this pandemic together, we're all struggling in different ways and experiencing the effects in different stages. Now, more than ever, please remember the power of compassion, patience, and gentleness, including for yourself. 💜
In many ways, returning to Costa Rica was returning home. Seven years ago I bought a one way ticket to Costa Rica and traveled alone for months. It was my first time traveling to another country by myself. During that time, lessons emerged at lightning speed and magic permeated every encounter. Costa Rica will always have a special place in my heart. When I returned this time, I pulled a tarot card during my first morning. The card said, "I have arrived. I am where I will always be: in love." This is my reminder to carry this medicine with me and remember that I am always here, exactly where I need to be, in love.
Dance has always been strong medicine for me, and especially so during my healing process. When I learned that this retreat was called, 'Dance Your Medicine,' and it was in one of my favorite places (Costa Rica!), I knew I needed to go. Filled with dance workshops, connection games, yoga, pool parties, beach sunsets, and so much yummy, gooey, loving connection, this was one of the best experiences of my life. Between the dances, deep shares, tropical fruit, and cacao, I am deeply fed. . I am overflowing with gratitude, joy, and love for everyone involved and everything we created and shared together. Simply sharing space and community with a group of people who love dance and expression was life-changing. More, please! 😋 . Thank you, @cocrea_dance, @danyasa_yoga_retreat, and the luscious lands of Costa Rica for providing the space for us to show up fully in authentic expression, curiosity, surrender, joy, sorrow, and LOVE. Thank you for the deep remembrance of play and pray existing as one. . Deep bows to the dance floor, the ultimate dojo of life filled with such juicy lessons in every moment. Until we meet on the dance floor again, I'll be dancing with you in my heart.✨
It’s been one year since I shaved my head. . At that time, things in my life were seemingly falling apart and they only continued to do so. . One year ago I was living with my Mom, supporting her through lung cancer, taking her to chemo and radiation, cooking, cleaning, and helping however I could. I was positive but realistic about her diagnosis and doing my best to process the gravity of the situation. It’s still a journey, but I’m thankful that she’s doing well now. . While I was caring for my Mom, my partner at the time fell in love with someone else and lied to me about it. Months later, he left me for her telling me he wanted to be single. One year ago, he told me he didn’t want kids anymore. Within months of our breakup, him and his new partner got pregnant. . While I feel sadness and compassion for my previous partner and the ways in which he wasn’t able to be honest, it doesn’t change the pain I experienced. I also acknowledge and take responsibility for my own wounds the situation triggered and realize that this telling is my own experience. . It’s been a disorienting year, especially in regards to my understanding of love, honesty, respect, stability, security, and trust. My sense of reality has been completely shaken. . I recognize that all of these things are threads in a story, and while they have significantly shaped me, they don’t define me. . Now I’m choosing to identify with the wholeness within me, with a life that’s filled with ease. This is by no means easy as I still have trauma that I work on processing every single day. No matter how much work I do, it’s still a daily practice to come home to myself and remember that I am lovable and worthy; that I will never abandon or forget about myself; that I can trust my intuition. . Reflecting and sharing helps me process and feel connected whether I’m sharing my joy or grief. Through sharing, I also hope I can help remind you that you are not alone. Whatever you’re going through, keep breathing; keep returning to your center; and please reach out if you need support.